Language, Film and the Visual Politics of Inclusion 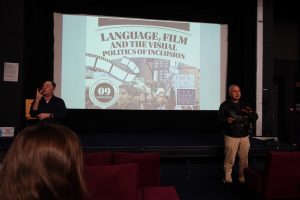 We were delighted to host our second mini film festival this month as part of the ESRC’s Festival of Social Science.

The event showcased short films made by former students of the University of Manchester’s Visual Anthropology MA programme, who are now independent filmmakers. They addressed themes from the Manchester-led, Arts and Humanities Research Council-funded ‘Cross-Language Dynamics: Reshaping Community’ research project which supported the films.

The focus of this year’s event was how language’s community-building capacity can contribute to a politics of inclusiveness, and what happens when it encounters the politics of exclusion

The first part of the programme was introduced by Professor Andrew Irving of the Granada Centre of Visual Anthropology and addressed the importance of sign language to deaf communities, and the highly innovative approaches taken to the politics of inclusion in the deaf schools that provided the settings for these films.

All films can be viewed on the ‘film projects’ page on our website.